Do you know me?

You would think that after 26 years in the military, and having earned a few dozen medals for outstanding service, the military would be as proud of me as I was of the service. But, one soldier who I had to discipline made a false allegation that I accepted bribes from contractors. While it was not true, and no one found an ounce of proof, and the soldier who falsely accused me was even released from service under less than honorable conditions; some people still saw me as guilty. I was given a choice of leaving the military voluntarily or being discharged. I was so angry with the world and so upset over a false statement about my character and reputation, I tried to commit suicide several times. I have no family and my “friends” turne4d their backs on me…so I started spending my time with a couple of homeless guys outside the VA center. I thought they had it made. So, I gave away all of my property to the Goodwill and joined the ranks of the faceless, homeless population in this area. Not a good life after all, but a life I now find hard to extract myself from. 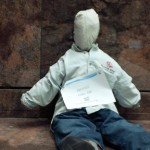