Do you know me?

My name is Mindy. I was an eighteen year old orphan in Kenya when I met an American woman who promised me the chance to attend college in the United States. I was delighted when she put my on a plane, but it took me not to the United states but to Mexico, where I was installed in a brothel where I was forced to work until I escaped six months later. En route to the United States border, I was raped by a man who was supposedly going to help me. When I finally landed in a shelter in Virginia, I was pregnant and traumatized. With the help of a homeless program, I am learning English and enrolling in a nursing school. 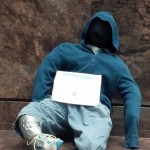